bbqs don’t mean that much to me 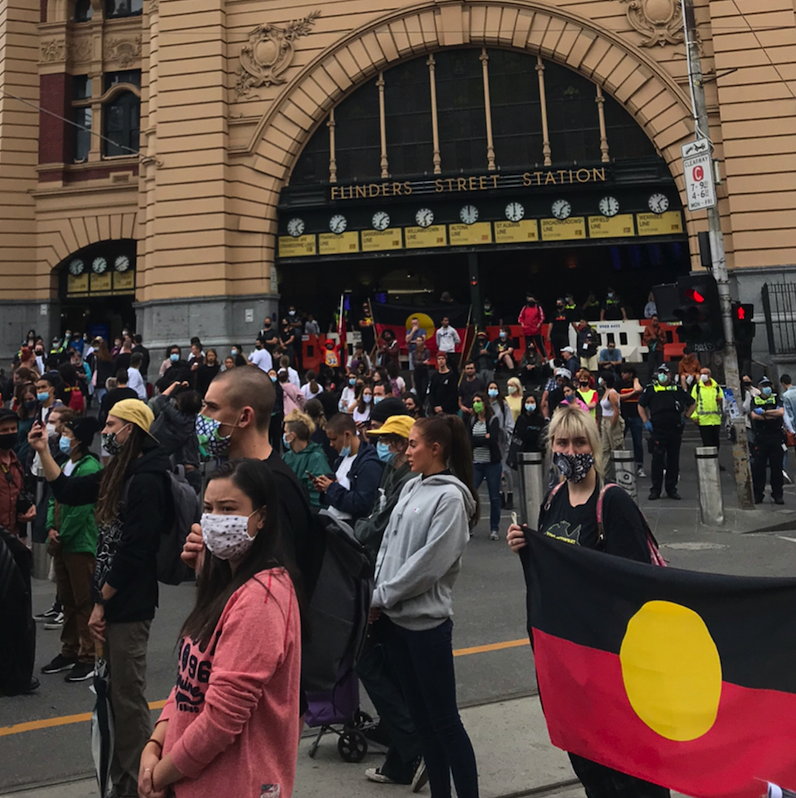 Content warning: Aboriginal and Torres Strait Islander people, and those belonging to Indigenous communities, are advised that the following article contains the mention of deceased persons and colonial violence.

I would like to acknowledge the Wurundjeri People of the Kulin Nation, who are the Traditional Owners of the land on which this article was researched, written and published. I pay my respects to their Elders, past, present and emerging. I thank those from whom I have learnt from and will continue to listen to. This land always was and always will be Aboriginal land.

Growing up white in Australia, my memories of January 26th can be summarised collectively as laid-back, hot, sticky (probably from trying to scientifically extract the last of my Zooper Dooper from its plastic) and for the most part, relatively uneventful. Looking back, I can picture a few polyester Australian flags waving lazily in the summer air. I can smell burgers on the BBQ and freshly cut watermelon. I can see a humble array of Savoys placed around a Coles-brand brie cheese, and I can hear the dulcet tones of the cricket playing on the TV inside.

Upon reflecting on these memories, I have come to realise that I am privileged to have experienced January 26th in this way for so many years. However, since then I have grown to understand the depths of meaning attached to this day. Today I am alert and sensitive to the reality that ‘Australia Day’ is a day of pain and mourning for First Nations peoples. It is a day that marks colonial violence and commemorates a structure of white supremacy in this nation. Today, I see January 26th still being celebrated as a national holiday as symptomatic of the institutionalised racism and systemic disadvantage faced by Aboriginal and Torres Strait Islander peoples in Australia. There is a clear divide between those who feel free and empowered to celebrate, and those who feel hurt and excluded by this date.

Nakkiah Lui, a Gamilaroi and Torres Strait Islander playwright and actor, says, ‘Most people just want a day to celebrate the place that they call home, to be part of a community, and to guide Australia into the future. I am one of these people, so why can’t we celebrate this on a day that includes all Australians?’ This is the very heart of the ‘Change the Date’ movement – inclusion. The community is pushing to find another date on which we can celebrate our nation in a way that brings Indigenous and non-Indigenous peoples together. (And there is a plethora of others to choose from that don’t represent the day this land was invaded by colonialists– May 8th anyone?).

Many that criticise the Change the Date movement say that it is just a ‘token’ or ‘empty’ gesture. They argue that moving the date we celebrate Australia will not help to fix the larger social, economic, and political disadvantage experienced by Aboriginal and Torres Strait Islander peoples in this country. I would like to suggest that this argument is flawed: how are we as a nation going to build lasting and effective change on a macro-level, to truly heal and reconcile, until we start listening to Indigenous people when they are protesting and include them in our national day of celebration?

It is important to recognise that the deeply embedded systemic disadvantage faced by First Nations peoples remains prevalent not just on January 26th – but all year round. The 2016 Census demonstrates a desperate need for a shift in education outcomes, stating that ‘only 42% of Aboriginal people aged between 25 and 34 had had a tertiary qualification compared to 72% of non-Aboriginal people within the same age group.’ According to the Australian Institute of Health and Welfare, ‘the potentially avoidable mortality rate for Indigenous Australians was over 3 times the rate for non-Indigenous Australians in 2018.’ According to the Guardian, ‘at least 474 Aboriginal and Torres Strait Islander people have died in custody since the end of the royal commission into Aboriginal deaths in custody in 1991.’

Changing the date is, in the grand goal of reconciliation, a small step. But it is an integral step down the right path for our government to make in order to signpost that we are listening, and by extension, that we care. The overwhelming majority of Indigenous communities have been calling for this date to be changed for years. Aboriginal and Torres Strait Islander people have gathered and declared January 26th to be a Day of Mourning since 1938, making it one of the first major civil rights protests the world had seen at the time, and one of the longest running protests today. For perspective, it should be noted here that January 26th has only been established as federal public holiday and celebrated as ‘Australia Day’ since 1994. Aboriginal civil rights activist and journalist, Uncle Jack Patten, said on the first Day of Mourning in 1938, ‘This land belonged to our forefathers 150 years ago, but today we are pushed further and further into the background.’ It has been over 80 years since that line was spoken and yet First Nations people still gather and protest to make their voices heard in 2022.

Now is the time for us as a nation to stop, sit on Country, learn about its history and heritage, and listen to what Aboriginal Elders and communities are saying. Dr Miriam Rose Ungunmerr-Baumann, Aboriginal Elder from Nauiyu (230km south of Darwin), activist, educator, and artist calls for us as a nation to practice the art of ‘dadirri’ which can be translated to, ‘inner, deep listening and quiet, still awareness.’ She says this practice ‘is [a] gift that Australia is thirsting for’. I wonder, what would it look like for us as a nation to practice ‘dadirri’ and use January 26th as a day of quiet reflection? A time to reflect on our history, how we are treating the land, how we are treating others, how we are moving forward.

I do not consider BBQs, navy bucket hats or paddle pools to be a foundational picture of Australian culture to me, nor does it make up a large part of my identity as an Australian. My identity as an Australian means so much more to me now. It has been shaped by the wisdom of those who have looked after the land for thousands and thousands of years. It has been stretched by reflecting on my own experience of privilege and how I might covertly benefit from my ancestry. It has been spirited by witnessing the peace, courage, and strength of Aboriginal and Torres Strait Islander communities. This Australian identity is one that is founded, not on an image of a day on the beach, but in an evolving and fluid experience of learning about the rich and diverse culture of the First Australians. To be frank, I’m prepared to lose all the sausage-in-breads Australia has to offer until I see a nation that is ready to welcome everyone to the table, in heart and policy. How about you?

To find out more about the Guardian’s ongoing investigation on Aboriginal Deaths in Custody and see the faces of those who have been victimised in this way, click here.

To read about how climate change is directly affecting the Torres Straight Islands, click here.

To learn more about the concept of why white Australians are encouraged to ‘pay the rent’, and to give to the Pay the Rent organisation, click here.

To bookmark other dates of significance for First Nations people in the 2022 calendar, click here.

To find out more information about this year’s NAIDOC week, click here.