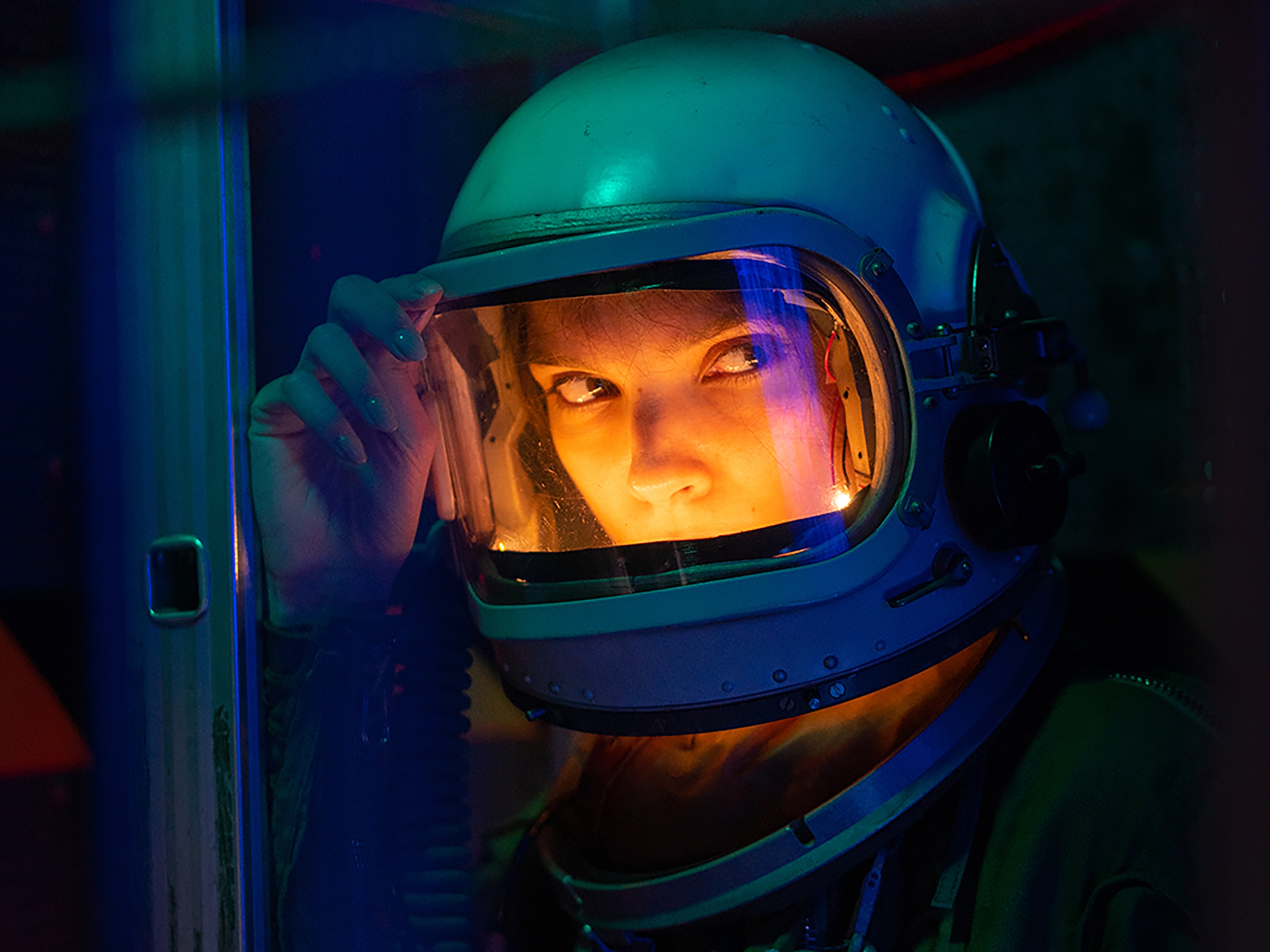 They said we had it all figured out. That it was our duty to take our message out there. To expand. Look outwards and forwards. But my dispatcher hasn’t contacted me for days, and no one even knows my name out here. How can I keep track of any message, how can I keep a hold of who I even am. I’m too far forward. I’m too far out.

The crash was 6 cycles ago now. Lt. Fifteen had transported us through the Lumin Sector of orange Lepidoptera lights and purple gas collectives. The second half of that sector is still uncharted, blackspace, but we’d pushed out further than that, past the C-boundary. He had pointed us down to the first Silver Class planet, just Twelve and I, after all the rest had been assigned to earlier celestial bodies, and we took the shuttle out as instructed, direct through orbit.

The Mothership was barely a dot in the sky when the engines malfunctioned and zapped our external vis. Gravity kicked out the landing gear and crushed the hull into surface debris — a solid landing if ever there was one. When we crawled out of the shuttle, it was clear the damage was enough to impede a journey through the outer atmosphere.

All the surface of the Silver Class was grey sediment, scattered with smooth circle formations formed by water movement from centuries ago. Twelve had to date it with a torchlight on his helmet and shaky hands on his line-laser, barely illuminated. A dark sun in the sky makes us feel unbalanced, untethered, despite any training.

Twelve’s sigh caused crackly feedback as he’d looked to the black horizon, our torches glinting perfect beams off the flat surface of the rocks.

‘We’ve been assigned to here,’ he’d replied. ‘There must be life.’

Three days we spent camping in the blackness, conserving our torches. We used them only to set up the sleeping dome on the first day, then to observe our equipment every morning. There was no sun cycle to adapt to.  A dark sun means no mornings and no nights, so we followed the Mothership time-loop on our suits, and used our sensors to navigate in our small radius. There was no sense in expanding exploration, not without a functioning exit off the planet.

I’d expected to see the fire-shine of another shuttle breaking through the atmosphere on the fourth day, after Mothership had registered the loss of the comm link, but there was nothing in the sky.

There was, however, something on the ground. It being so dark, the light in the distance was not hard to miss. It lit up the horizon as if the air was solid and concaved, amplifying its colour across the surface, turning smooth rocks to glowing stars. I pushed Twelve’s shoulder where he was sitting beside me, to alert him to look up from the data log he’d lent against the dome’s frame, and he did. I heard his breath halt over comms, the static crackling gone for a beat, my ears enveloped by the silence of the air around us. Then he was moving.

‘We need to establish a baseline,’ Twelve said to me, scrambling to pull out his responder.

‘Is it intelligent?’ I asked.

‘It’s the only thing seeking us out,’ he replied.

As it got closer, it got harder to see its form, our eyes straining to adjust. I polarised my filter, and when I held my gloved hand out in front of it, I could see its texture of imperfections. Pale green turning to white, turning to pale yellow, glowing around the outline of my fingers, eating up my shadow.

We weren’t scared then. This is what we do, and displaying peace in first contact is more important than our individual safety. Twelve set the emitter on the responder to the soft-humming four-time beat – communication A – and we waited for a response.

We couldn’t discern sounds from it. It became apparent that there weren’t any. The being seemed to roll along and float at the same time, no friction against the rocks despite touching them. The air was thick enough for sound to travel, and yet, aside from us there was only silence.

The light being stopped before us, and seemed to ooze outward, sinking across the rocks.

‘It must see us somehow,’ I murmured.

We cycled through the communication protocol carefully: the sounds, movements and visuals. All the while monitoring changes in air and energy spikes. Every reaction was the same, just a silent observer sitting before us. No movement or change.

The light was beginning to make my head ache.

‘It has to be light,’ I said. ‘Something about light. We could adjust our visuals, mix light, try to mimic their colour?’

‘That’s already been covered in communication Q to S.’

‘The Lepidoptera would’ve responded by now,’ I huffed.

In the following days, more of the Silver Class planet’s inhabitants approached, surrounding our camp. It made our torches obsolete, made reading our equipment easier, and gave us further opportunity to observe. However, we still hadn’t learned much about them. Twelve couldn’t find any differences in our readings from when we first landed to now, as if the beings weren’t there at all. I couldn’t discover how they were producing such luminosity, all the data defying analysis. Days were bleeding into each other, and nights were getting harder to sleep through as their numbers were increasing incrementally every few days, every cycle. The aggregate of their light grew brighter and reached further, but they never changed and never touched us, only watched us.

We made the decision halfway through the next cycle that we would push past their makeshift barrier. Mothership wasn’t looking for us, we needed resources, and we needed to be certain this was the intelligent life we were looking for. I couldn’t tell if it was the first being we had tried to make contact with, or another one that broke from the line that started following us. They all looked the same and they didn’t register in our readings.

When I walked between the beings, a phantom heat moved over me, mirroring the glow onto my suit, making the contrast of the dark horizon seem so cold and distant. I knew it was just my mind playing tricks on me, and I held my equipment more securely on my back.

The panic set in when we had walked two days and found nothing. We were forced to return empty-handed. The pale yellow light, still flittering over the rocks, guided us back.

On the third cycle, I’d had enough. Twelve could sense it in me, in the way I couldn’t answer his questions clearly and how I was fumbling the logs that day.

‘Think about it. They’re malleable, they sit by each other. How else do they communicate?’ The rationality was clear to me, the reason why they had been waiting around us so long, watching for something to happen. We had to make the move. ‘How else can we give our message?’

He watched me as I walked out of the dome, directly to the line they still held. The light had gotten so bright I could barely see my hand as I lifted it to the being’s form, mound-like and blurry below me. I pushed, flat palmed, and met as much resistance as a sleeping pallet, its body curving about my hand.

The effect was immediate. Veins of deep green and blue spiralled out from the impression, and the being’s colour dimmed, fading from pale yellow to aqua to purple on the RGB spectrum. My heart dropped to my feet as I watched it dwindle before me, the surface of its form turning as glassy and dark as had been our reality for the first days on this planet. I pulled my hand back.

I saw Twelve run for me when I looked back, and I saw the row of light beings behind him expand in size, their width gushing out over the rock formations, their height reaching higher than the sleeping dome, higher than our shuttle. All their forms were joining, and we were flattened as they reached each other at the peak, closing out the darkness, blinding us in a whiteness as bright as a star.

That’s where I am now. Unknowing if my eyes are open or closed, unable to move. My suit AI has been tracking the days for me, and I’ve been writing my log through it, detailing as much as I can remember. I can’t hear Twelve, I believe our comms were muffled by whatever happened. I hope my suit will outlast me, and when the crew find me, they can access these logs still.

As for the message we were to pass on… I can’t remember it. Fifteen reminded us daily of the peace, of following the truth. But I don’t believe our truths apply to the beings here. So, then, what could be their truth?

Photo by Mikhail Nilov from Pexels