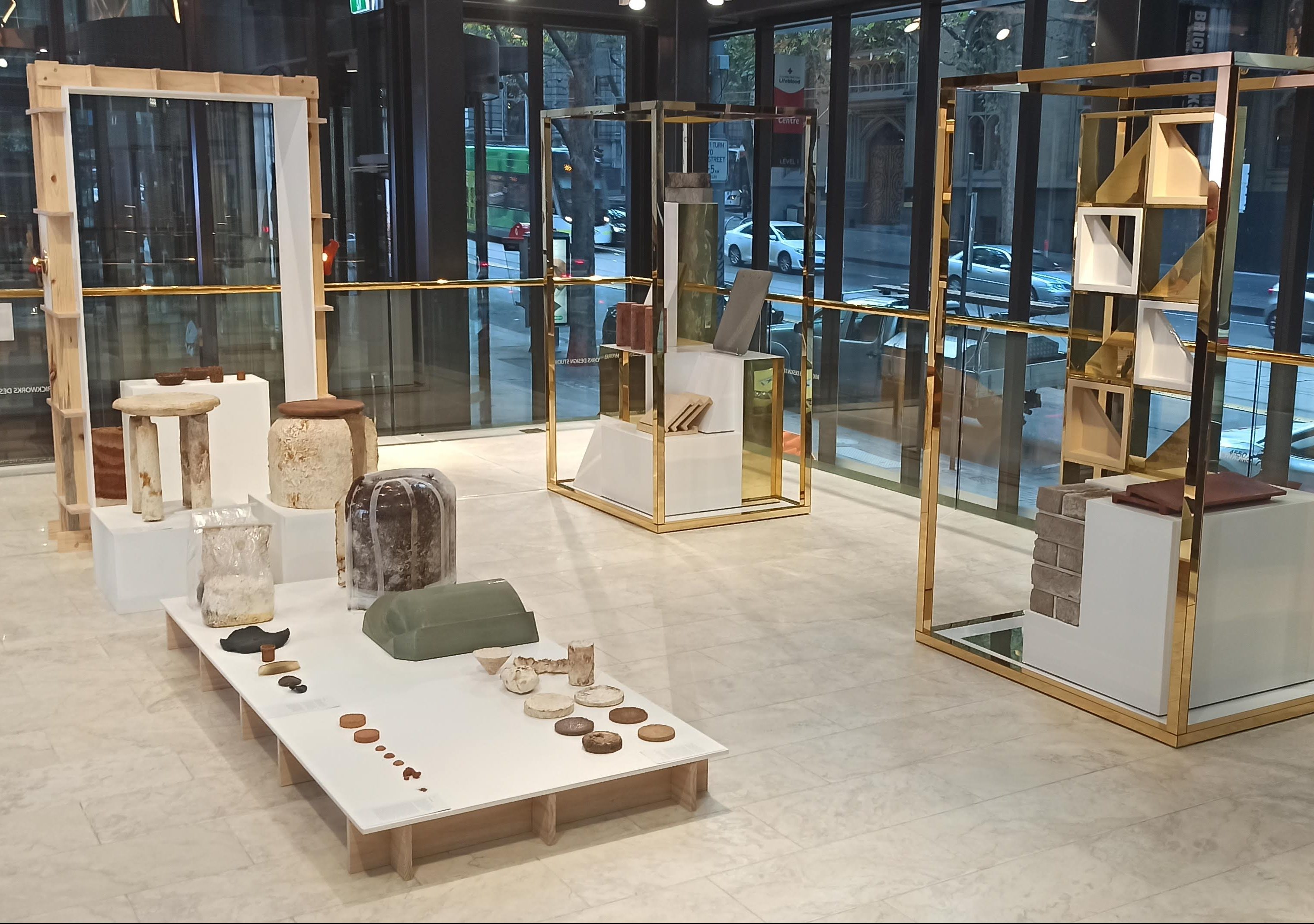 Waste is one of the most significant challenges of our time. Australia produces approximately 540kg of household waste per person, per year. Melbourne alone can fill the Eureka Tower 50 times annually. Although some of this material is recycled, the vast majority is stockpiled in warehouses where it remains unsorted and continues to grow.

Fortunately, design is an industry that flourishes when presented with a challenge. A single material has the power to capture the imagination of a designer and inspire them to develop new, innovative products. Recently, the design scene has embraced the challenge of repurposing various forms of waste generated from daily life and business. We have seen the likes of iron residue and algae repurposed into striking new products for consumers to enjoy. The industry is on a mission to turn our waste into something of value, and challenge our current perception of the life cycle of a product.

For this year’s Melbourne Design Week, Brickworks Showroom teamed up with the Gold Coast creative studio, Studio Flek, to produce an exhibition of biodegradable, home-grown furniture. The founder and head designer at Studio Flek, Chris Miller, partnered with Balter Brewing Co. on the Gold Coast to develop their latest range of bar stools. Not, however, from the traditional materials you might expect. Chris and his team are repurposing the beer hops that remain after the brewing process to grow bar stools, using mushroom spores as a binding agent. In an almost poetic cycle, Chris is creating bar stools that are made from beer themselves, and will hopefully seat visitors in the Balter Brewery one day.

According to Chris, who I was lucky enough to speak to on the opening night of the exhibition, the bar stools will be entirely compostable. Spent hops and mash grain are bound together by mycelium, the root structure of mushrooms, to create a composite material that is 100% biodegradable. Previous testing has found that mycelium has a compressive strength greater than standard brick, whilst maintaining a light and spongy texture, similar to that of high-density foam. In addition to these incredible qualities, the mycelium is also cheap to create, fire-proof, and sound-proof. When I asked whether he believed it was commercially viable, Chris mentioned that there were already a number of studios in the United States and Europe finding commercial uses for the material, including acoustic panelling and insulation within buildings, or as a substitute for foam or plastic in packaging. Chris explained to me that there are a number of benefits of designing with materials perceived as waste. They are low cost, sometimes even negative, as businesses will pay you to take them off their hands. The potential properties are currently unknown and destined to shift and improve with new technology and production methods.

The need to design products with a considered, cyclical life cycle is incredibly important.

Chris also spoke about the Japanese concept of Wabi-Sabi as a key influence for his explorations, where imperfection and aging are embraced as natural parts of the life of a product. His stools are able to be broken down and used for a secondary purpose when their primary function has been fulfilled. While these ideas of cyclic design are not new, it has taken until now for them to be adopted into the mainstream consciousness.

Exhibitions like this one, supported by the NGV and Melbourne Design Week, play a huge role in integrating and normalising these ideas, into new designs and materials. Neurasthenic research shows that we perceive design and art differently if it is labelled and displayed in a gallery or show, as opposed to a store, or even a studio. The recognition from an external ‘trusted’ body alters our perception of a product’s validity, especially if the show is world renowned. A product is unconsciously assumed to be vetted and tested in order to have made it to the stage. This phenomenon has the power to lead individuals within the wider design community to take the leap of faith and invest in these emerging technologies, helping them to become more mainstream. When knowledge is shared, it becomes a tool for entire communities of designers and innovators to push the possibilities of an idea, technology or material.

I for one, am incredibly thankful that Melbourne Design Week chose the theme, ‘Design the world you want’. In a time where resources are precious, it is a holistic theme that asks a very pertinent question. Designers can no longer be seemingly thoughtless in their production and encouragement of a consumer-based society. My hope is that we can all play our part in shifting this narrative of waste towards a circular resource economy before it’s too late.