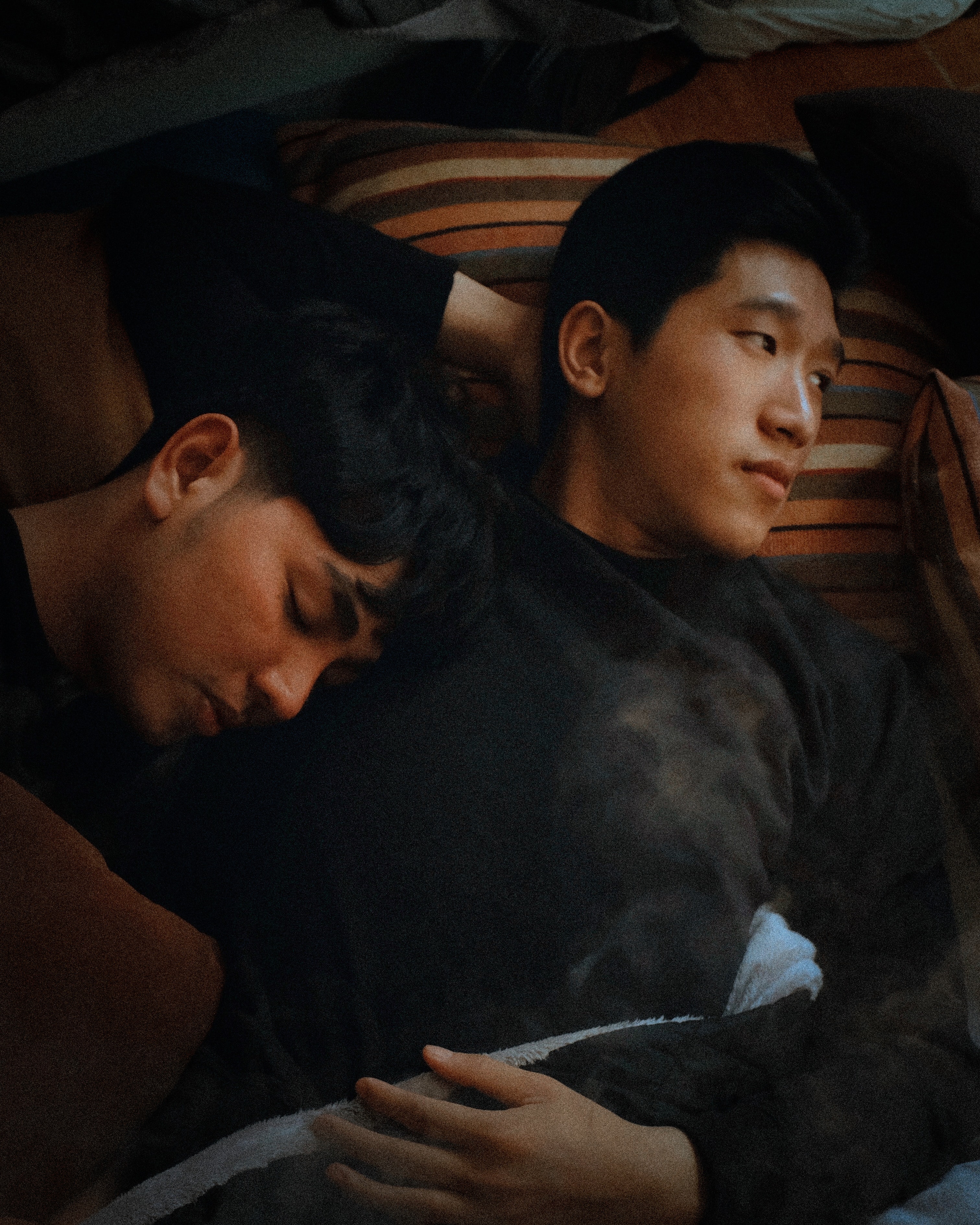 The bed was caught in a limbo between comfortable and irritable – itchy at every touch. The concave deepened after that evening, indifferent to permissible reasoning. A time limit had always been agreed upon, out by 10, no matter what. The democratic rulings of a bedroom always seemed more agreeable before fucking, and tortuous once the door closed on the way out. Always carefully shut to avoid a slam, and thus unwanted attention. Sliding on unbuttoned jeans, shortly before the exodus, the silence proved to be an excruciating companion, though a faithful one.

Albert only had his left sock on. He assumed the right resided beneath the shadows of the bed, or on the right foot of Harvey, who was most likely cycling toward the far end of Coventry Street by this point. Stoic and calm, Albert lay diagonally on his bed. Half consumed by the sheets, half vulnerable to the biting cold air that filled the room. His erectile sheath still bearing him, knowing that he would not sleep in that state. It seemed as though moving from that position – comfort purgatory – may contain the potency to, only just, kill him. Harvey’s actions were premeditated, this was routine. Harvey’s rapid evacuation never surprised Albert, though he was always paralysed on the site of passion, which never seemed to not catch him off guard.

The hors d’oeuvres had an overbearing artichoke component, with a lot of what seemed like pepper, though Albert couldn’t be sure. He had dropped the appetiser on the floor as he attempted to nonchalantly navigate his way through, peers, acquaintances, friends of friends, pricks and arseholes, to the sanctuary of the free bar. It seemed like a social obligation to either subsidise or – if you really respected your friends – pay for the lot. Albert had just subsidised when it was his 21st. However, Amalie insisted on drinks being covered until at least 10 pm and, seemingly, Mum and Dad had no issue. This disparity promised to linger only momentarily under Albert’s skin, as somewhat of an irritation, though not warranting formal action. Much like a small, semi-itchy rash on the back of your calf, not worth the energy of an appointment to address, rather, it was fixable with an Epson salt bath and the application of some Cetaphil.

‘Beers, Wine, and Cider’, was written with ill-penmanship in mossy green, above the chef’s specials that had been served moments before, and were now probably half-digested in the guts of the previous patrons.

‘Uh, maybe just a pint of stone and wood,’ Albert squinted and sloped his brow to appear somewhat experienced in the tedious dance of bartender interaction.

Moments after the first sip – which promised so much, according to adverts of hard-working men in tight singlets taking that initial heroic sup of light protruding lager, which was actually rather disheartening – the speeches began.

‘Hellllo everyone, hope you’re enjoying your drinks… on me!’ Dad was a little pissed. Usually, a joke in front of this capacity was unthinkable. Though, the crowd laughed in their timely facade, as the panel of speakers lined up – some bearing faces of unfortunate souls facing a firing squad, the others just a little tipsy and daft-looking.

Next to brave the microphone was Harvey (one of the unfortunates), ‘Heya everyone. Hope you’re all having a grand evening, thanks for coming.’

Albert lingered at the back of the bar, strangling the neck of his pint.

‘…yeah. Uh, as most of you know, Amalie is very special to me. I couldn’t ask for a better girlfriend. It’s been nearly…ah, 4 years now.’ His eyes flicking to the left, assessing Amalie’s body language. Heavily intoxicated by this point, an acceptable smile gripped Amalie’s cheeks, one that she most definitely practised in the mirror beforehand. Harvey’s speech continued with no noticeable moments.

With every scheduled scan of the room during Harvey’s speech Albert simultaneously begged for Harvey’s eye contact, and callously refused it. Impatiently wrapping up his speech, Harvey passed the mic to the subsequent victim.

They both disappeared, separately (seemingly always separately), to the toilets. ‘Albert?’ whispered Harvey, with a firm hunger. The cubicle door opened to reveal Albert. Both stood still, waiting for the other to break. It soon became apparent the other would not, so Harvey moved in. Pressing his chest against Albert, he closed the off-white cubicle door behind them. Harvey’s tie pin pushed directly into the exact adjacent spot on Albert’s frail body. The pain was not worth mentioning, like the rash. Their close proximity was no match for the tension drawing one to the other. Both their lips argued, then caressed, contested, then held, teased, then mimicked. Neither of them had a choice. All whilst the external party vibrated back and forth, the perennial faceless dance continued

Lachlan moved to Melbourne in the winter of 2021 to study Screen Production and Film. With a keen interest in literature, and as a way to understand his new environment, Lachlan has found creative writing to be an engaging practice.

Photo by Hà Nguyễn on Unsplash