in the fight against sexual assault, validating women’s voices is vital 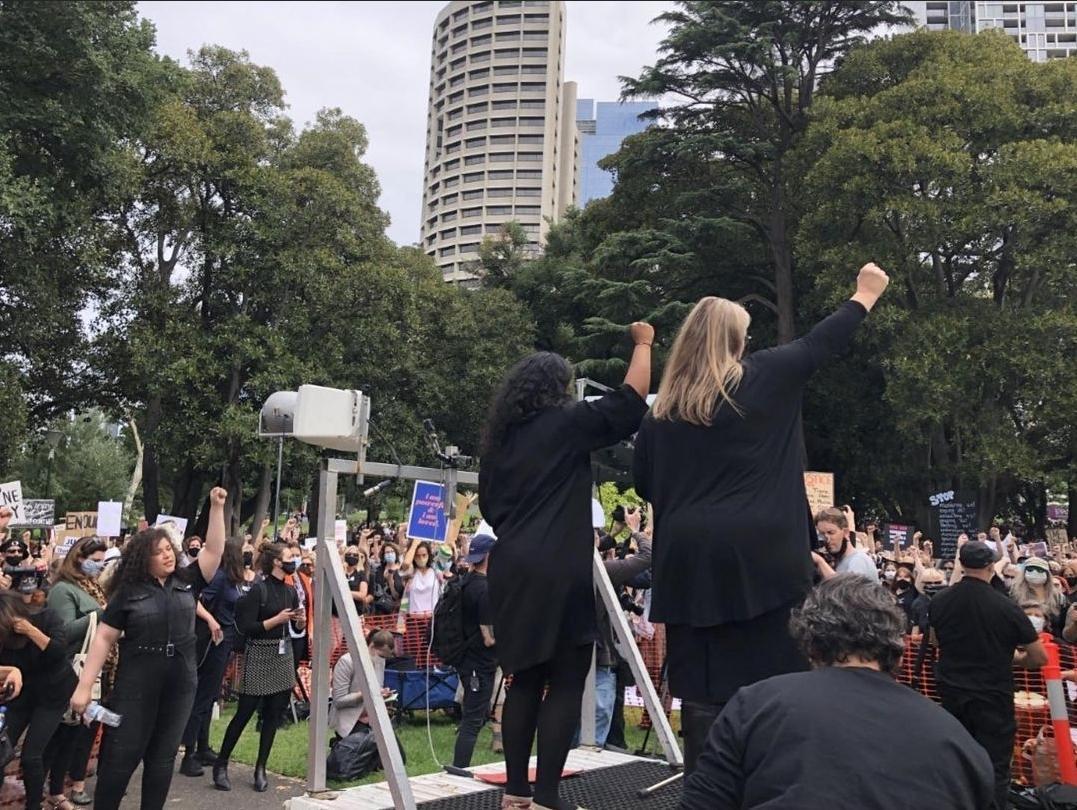 On a particularly sunny, blue-skied day in February 2010, I was riding the number 16 tram to St Kilda beach with a group of my high-school friends. I wore a red floral tank top and some cute denim shorts, with a Cotton On tote bag loosely flung over one shoulder. The smell of sunscreen and freshly painted pink nail polish hung in the air just as starkly as the sound of scratching tram tracks.

While holding on to the safety handles above with sweaty hands, I noticed one of the boys in our group looking at me. My stomach flickered a little and I stared at my feet, embarrassed. Was he definitely looking at me? Do my thighs look too big in these shorts? Will he still look at me when I’m wearing my bikini? Maybe I imagined it. The tram doors flung open and I turned to get out of the carriage, relieved to have a break in the awkward-teenager tension building in my head.

The relief didn’t last long. Somewhere between the gap from the tram and the platform outside, I felt two hot, firm hands grab my butt cheeks from behind. Trying to regain my balance in a crowd of people getting on and off, I stared up at this boy with my mouth a little open and cheeks rapidly reddening. He looked back at me and was chuckling along with the other guys, and even a few of my friends. There I stood, a fourteen-year-old girl, inescapably on display for all to see. I hardly spoke for the rest of that day.

The other night, I found myself at a party standing with a group of girls, some of whom I had never met. We started discussing the sexual assault allegations that had surfaced in the media and shared various experiences of our own.

“You don’t get hurt or feel frightened at a safe venue,” said one girl, “it’s the travelling there and home that scares me.” She told us about a time she had left Yah Yah’s on a Thursday night to find a crowd of drunk men waiting outside. “They yelled, ‘Kiss!’ at my girlfriend and I when they saw we were holding hands. Like, we’re not a fetish.”

“I can’t count the number of times I’ve been groped in a club,” said another. “One time, I rejected a guy and he got so mad that he told the bouncer I was drunk.”

At this party more than ten years later, that day on the tram flashed into my mind from a vault of random memories that make me cringe as hard as the day they happened. As I stood in this circle of young women swapping their stories, I was reminded that mine needed no complex explanation or justification for telling it. These women understood exactly what happened that day on the tram, and I knew they would, because all of our experiences a part of one narrative: the story of a society where women are sexualised, and sexual assault is normalised.

There has been a spotlight in the media on allegations of sexual assault and rape, spilling down from our Federal Government to high schools across the nation and beyond. I cannot help but wonder, Do the headlines circling around Australia at the moment surprise me? Or does it feel like the rest of the country is just starting to catch up on the conversations girls are having at parties? The tired, old, misconceived narrative that women are raped in dark alleyways by Really Bad Men is finally being challenged on a larger scale. Our society is sitting with the reality that sexual assault is so prevalent, that it’s happening every day to our little sisters on social media, to our female colleagues in our workplaces, to our grandmothers in their nursing homes and to our friends on their first dates, most often by men they know personally.

The pressing problem of sexual and other gender-based violence being experienced by women at overwhelming rates in Australia and globally is undeniable. The Australian Bureau of Statistics has found that one in five Australian women have experienced sexual violence, with one in six women experiencing this abuse before the age of fifteen. According to a recent survey for the UN Women UK, 86 per cent of British women aged 18 to 24 stated they had experienced sexual harassment in public spaces, with only 3 per cent saying they had not.

Unfortunately, these statistics only worsen for women belonging to minority communities across multiple areas of gender-based violence. First Nations women are 34 times more likely to be hospitalised as a result of family violence when compared to non-Indigenous women. Approximately one in three women with a disability have experienced emotional abuse from an intimate partner compared to one in five non-disabled women. Transgender women are more likely to experience sexual assault at the hands of strangers than cisgender women, and their experiences are often excluded from sexual violence data. These statistics are disheartening, but they only begin to illustrate the violence that the vast majority of women in Australia face throughout their lifetimes, as many testimonies remain unreported.

The recent testimony of Brittany Higgins has been a hollowing reminder to women across Australia that if a rape can happen to a politician inside Parliament House, it can truly happen anywhere. Chanel Contos’ petition for “sexual consent education”, in schools has stressed the saddening reality that teenage girls face sexual assault at an overwhelming rate in their developing years. The Morrison government’s “Milkshake” ad in response (attempting to educate teenagers on consent) has only illustrated just how out of touch our leadership is, with both the seriousness and basic principles of sexual consent. Marie Barbaric’s story of institutional sexual abuse following her removal from her family under government policy ­­– now known as the Stolen Generations – has reminded us of the double-edged sword of sexism and racism Indigenous women have been battling for two hundred years.

Women across Australia are deeply hurt and angered by this injustice, and the March protests across major cities have highlighted that they are ready and willing to use their voices to make that clear.

How we react to the testimonies of women, and their voices in society, will be the key to our battle against the patriarchal cultures in which these stories of sexual assault are born. Women like Brittany Higgins, Marie Barbaric and the many that have gone before them, are demonstrating that speaking up about sexual assault is an incredibly powerful weapon in revealing truth, engaging public discussion and paving the way for others to go next. Women who come forward to share their stories are breaking the stigma of shame and silence that has followed these experiences for decades.

However, with every story that makes its way into the public sphere, there seems to remain an inevitability of dismissal, criticism, or even blatant disbelief lurking behind women like a shadow. Recently, a journalist for The Courier Mail wrote, “since when does being Australian of the Year give you licence to personally attack our Prime Minister?” in response to Grace Tame’s public critique of the Prime Minister’s handling of the rape allegations against Attorney-General Christian Porter. While Defence Minister Linda Reynolds needed to be forced to apologise to Brittany Higgins, after calling her a “lying cow” following her report of rape in Parliament.

Our response to women speaking their truth in the public sphere mirrors how we value women in society. Every dismissal of one woman’s story diminishes the right of all women to speak and exercise their value as people that are allowed to do so. If society has truly moved beyond the days where women are silent accessories in a man’s world, then female voices need to hold as much space and power as their male counterparts. For those that are quick to shelve, dismiss, zone out on, talk over, critique or cheapen the voice of the women in your life, we must dare to check in with ourselves and ask, Are we valuing the testimonies of women in our society to the same extent as we do those of men?

What is perhaps an even more important power behind the stories of women is their ability to connect us to each other and help us to understand our own experiences. While each experience is unique, every voice comes together to form the next chapter in the narrative of a women’s movement. Yet, a voice only resonates if someone is there to hear it. And if you are not hearing them, then you are not paying attention. Women are speaking up more frequently than ever before, which makes now the time to hold fast in uplifting and validating their voices until the fight against sexual assault and gender-based violence is won.