the nightingale: a revision for the frontier film 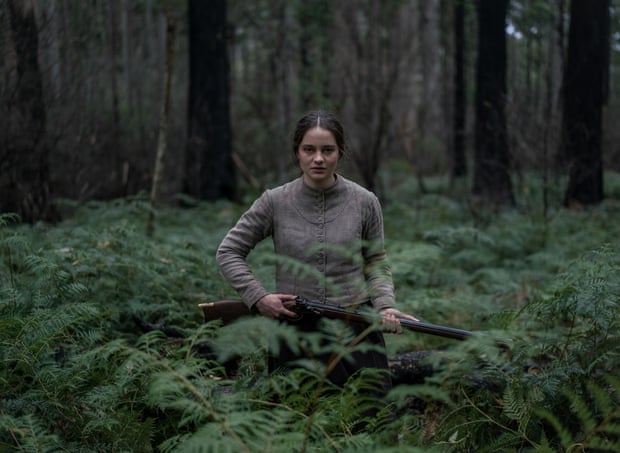 A great majority of the Australian genre-film canon is indebted to movements conceived by filmmakers in the international realm of cinema, leading to filmic delays in topical popularity, mimicry, and global otherness. In the contemporary genre-market, then, societal displays of suppression may in fact be Australia’s greatest ally on the world stage, manifested through a strong sense of pertinence, revision and uniqueness – a vision ratified by the Australian horror film I wrote about last week: Jennifer Kent’s film, The Nightingale (2018).

Today, I would like to discuss The Nightingale’s status as a genre film, and the way it is loosely bound to the Western canon. Ultimately, the film functions less as a traditional Western and more as a reimagination of the American frontier film, placed within the context of a factually scrutinized, unapologetic retelling of British settlement in Australia. The impact of this subversion on audiences, which I will come back to later, underscores the importance of escaping – or at least twisting – traditional conventions when seeking to tell stories through cinema, and for spectators, looking beyond the surface level of a genre film.

My interpretation of The Nightingale generic underpinnings is strongly validated through representations of colonialism and implications of subversive imagery. As a Western, Kent’s film is motivated by the adherence to a set of generic tendencies proposed by Douglas Pye: plot, structural features, character, time and space, iconography and themes (2012, p. 241-242). The Nightingale follows a young heroine/hero partnership as they pursue a villain-led travelling party across the untamed landscape of the Australian bush – the heroine seeking to enact revenge upon her rapist through rudimentary justice. For those of us familiar with the genre, this purpose-bound struggle against a body of evil across an arduous journey recalls genre tropes of the 20th century Western. Replace the lead characters with cowboys, the villains with American Indians, the Tasmanian bush with a Nevada plain – and you have a frontier film.

While the film’s narrative conventions and iconography adhere to the Western mode, Kent tackles the ideological challenges built up by this genre by opting for a revisionist, self-critical approach to the western. (Gallagher, 2012, p. 299). As Bazin & Gray write, “…[the revisionist western] looks for some additional interest to justify its existence – an aesthetic, sociological, moral, psychological, political…quality extrinsic to the genre and which is supposed to enrich it.” (2005, p. 151). The generic qualities of The Nightingale, which aim to subvert or challenge colonial frontierism, are further illustrated through explicit instances of sexual assault and modal hybridity in presentations of ‘the uncanny’.

Within the film, there are three sequences where women – one colonial servant and one imprisoned Indigenous women – are forced into acts of sexual violence at the hands of imperial soldiers. These scenes were criticised by festival-goers and media personnel during the film’s initial release, but nonetheless, it is vital to consider these identities and their symbolic implications within the Western mode.

Let’s first consider the function of the soldier in the western film: they are frequently represented as heroes who seek to overcome ‘savagery’, protect those in need, and bring peace to the frontier. In The Nightingale, however, these ‘heroes’ are demythologised by their own acts of savagery – through idiocracy, insobriety, racism, passivity to militaristic rank and a general disregard for others’ quality of life. They personify historic colonial violence; the part of Australia’s national conscience consistently willing to be ignored (Harman, 2020 p. 12). If the soldiers become villains for the sake of being revisionist, then, do the ‘others’ become the heroes? While masculine characters and narratives have paved the Western’s history, women often exist in these worlds as a byproduct of plot and structural features – as disposable, often dead, and existing purely to serve a function.

Now consider Clare, a young Irish convict and mother, who traverses the rugged landscape of ‘Van Diemen’s Land’ to enact revenge upon her oppressor. She is self-liberated, determined and acts upon her suffering. In a way, she protects others and brings peace through justified violence (to borrow from the rhetoric of the Western canon). With Clare at the centre of the narrative, Kent not only emphasises female agency but the ‘rape-revenge’ arc too, interrogating the valorisation of ‘wild colonial boys’ and masculine assertions of power (Johnson, 2020 p. 4).  The atrocities she endures are of contextual relevance to the cultural climate, pertinent to colonial and contemporary history, and as necessary as the conversations that have become a product of The Nightingale’s viewership.

This is the film’s greatest subversion of the western canon; a complete revision of the genre’s cinematic intent and its ‘afterwardness’ felt by viewers post-viewing. It is here the film justifies its existence within the genre and is granted the definition of ‘mannerist’. Kent’s deeply subversive motive in writing multiple acts of sexual violence into a script and showing them on-screen, reminds the audience that this subject matter exists beyond the fictional space, confronting us twofold and trapping us within an unavoidable truth.

While this method of delivery lacks subtlety and may not be wholly necessary in achieving realism, Kent’s transparency is undeniably effective for the audience.  In The Nightingale, sexual violence creates a motivation for the heroine, who is cunning and capable and no longer an accessory to narrative and to man. For the audience, this is horrifying to watch, eliciting a confrontation that defies expectations of the Western mode. For some of us, Kent’s subversion may evoke strong emotion, forcing us to momentarily confront fears, trauma or remorse. For others, it may serve a more powerful function, by shifting or possibly rewriting thinking/behavioural patterns in a manner similar to CBT treatment (APA Div. 12, 2017).

As I stated in last week’s essay, The Nightingale is a film best understood within the context of Australia’s colonial history and the western’s evolution in contemporary cinema. This is not a coy film playing with the tensions of familiarity. Instead, Kent’s sinister, fearful, and distorted view of the world nominates terror as its reigning power, rather than beauty, with all expectations subverted and very few gratified. As writer and director, Kent silently assesses the audience’s familiarity with narrative expectations of the Western and subverts them through her use of challenging imagery and content in a context that while safely digestible, is by no means easy to stomach.

The Nightingale exists in a web of influence, and its determination as a Western is limited by this very distinction. It does, however, solidify the surprising ways that genre films can reveal their deeper implications – as long as we’re willing to look closer, past the surface level, and examine what their semiotic language is really telling us.

The Nightingale asks us not to shy away from considering where learned narrative expectations come from or whether they uphold antiquated rhetoric. Ultimately, the film reminds us that storytellers can be truthtellers too – and should strive to be. After all, if Australia’s colonial history is built on blood and violence, and its national conscience is guilty of this past, then shouldn’t our national cinema aim to challenge these anxieties by confronting them head on?

Jasper Caverly can be contacted via email, at caverlyjasper@gmail.com

Harman, K. E. (2020) Uncanny parallels: Jennifer kent’s the nightingale, violence and the vandemonian past, Studies in Australiasian Cienma, (In Press).