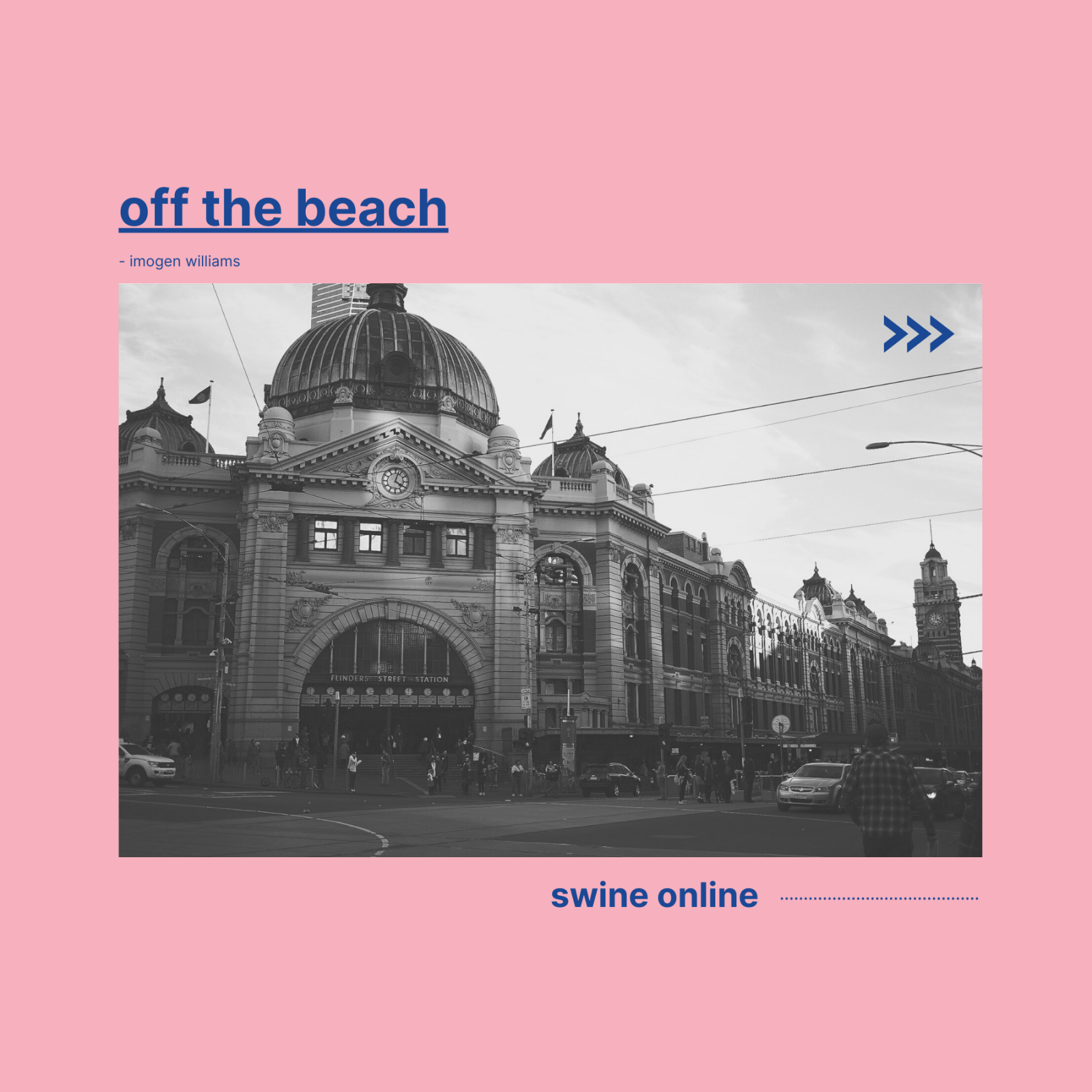 One thing keeping me entertained during isolation is scouring the weekly TV guide for films showing free-to-air. I have seen great films such as The King’s Speech, and not-so-great films such as Daleks’ Invasion Earth 2150 A.D. One of the former such films I’ve watched is the 1959 classic On the Beach, directed by Stanley Kramer, based on the novel by Nevil Shute. I’d been wanting to watch it for a while, since my Mum had told me it was a fantastic film with a brilliant cast including Gregory Peck, Fred Astaire, Ava Gardner and Anthony Perkins (best known as the creepy smiling guy from Psycho). Plus, it is set in Melbourne!

Eager to find out what Melbourne looked like in the days of my parents’ early childhood (spoilers, very different), I watched the film. All my Mum said was true; it was an eye-opening and thought-provoking masterpiece. The film is set in an alternate Melbourne of 1964, in the aftermath of a nuclear war that had wiped humanity from existence everywhere but Australia. The film follows the final months of a group of people’s lives, as they struggle with the knowledge that a cloud of deadly radiation will inevitably reach Melbourne. So, it was quite a distressing film to be watching in the middle of a pandemic, a time when many of us are experiencing a downturn in our mental wellbeing. For me, however, the viewing of the film seemed apt since many aspects of the film have direct comparisons to our current COVID-19 crisis.

In the film, a young Australian woman, Mary Holmes, is in denial about the situation. She is unable to accept that in a few months, humanity will be no more and she cannot bear to hear anyone talking about it.

People have also had this reaction in response to the COVID-19 outbreak. Some, like Mary, are in denial and wish to carry on as if the virus does not exist. We have seen this happen in Melbourne prior to the second wave, with several large families gathering and thus causing outbreaks. Like the film, people are literally gathering on the beach in Australia, and in the US and in the UK. They are ignoring restrictions, not wanting to miss the warm weather, despite the stupidity of such actions. This is still happening during our second lockdown, with people having parties despite the danger they present. Although we can all get tired of constantly hearing about coronavirus, as Mary did about radiation, we must understand the intensity of the situation and respond seriously and sensibly. Mary’s husband Peter understands the enormity of the circumstances and recognises the need to accept the facts and prepare for the worst, which is what we must do too.

Once Mary stops denying humanity’s dreadful plight, she plunges into depression for the remainder of the film. The stress and horror of the COVID-19 crisis has caused some people to do the same, with calls to mental health services in Australia increasing substantially from last year. Crisis support service Beyond Blue reported a 66%, 60% and 47% increase in calls in April, May and June compared to the same months in 2019. Callers reported feeling “worried, uncertain … overwhelmed” and experiencing “exhaustion and fatigue”.

Mary’s denial and depression, and Peter’s pragmatism, are seemingly familiar and justified responses to an unprecedented event. However, the way On the Beach depicts the overall community response to life’s total upheaval, is surprising, I am shocked by the incredible order and calm demonstrated within the film, as the end approached. People having parties, all conducted with an air of civility. There are scenes of drunkenness, sure, but everyone remains fairly reserved. Citizens line up in an orderly fashion to collect their government-supplied suicide pills, as their names get ticked off a list.

There are no fights as people collect their pills – a stark contrast to the video back in March that went viral, of two women selfishly fighting over toilet paper. There was no panic buying, just an acceptance that there will be shortages, like that of petrol, perhaps because WW2 was still fresh in the characters’ minds. Rather than panicking and taking all of the alcohol for themselves, in one scene featuring two men at a club, they simply grumble that there is no way the members will get through all of the bottles of port before the end comes.

Last year, I watched the 2012 American film Seeking a Friend for the End of the World, which detailed the final weeks before Earth was destroyed by an asteroid. This film depicted people behaving and reacting to their impending doom in ways I considered to be far more realistic than in On the Beach. In the modern film, there are riots with people burning buildings and committing murder, because they can get away with it. There is a drunken orgy in a restaurant, and people stop going to work because there is no point, so they generally run around doing whatever they damn well please.

Near the end of On the Beach, Captain Dwight Towers, commander of an American submarine, feels an obligation to captain the submarine back to the US when his crew tell him they would prefer to die at home than in Australia. Dwight is unwilling to do this, since he would like to stay and die with his lover Moira. However, he decides to leave her behind to help his men head home, as he sees this as his duty. He does this despite the fact human civilisation is mere days away from its end.

I told my Mum that the order and goodwill shown in On the Beach seemed unrealistic, and was surprised that she believed this behaviour to be perfectly accurate. Mum explained that she was alive during the tail-end of the era when the film is set, during 1950s and 60s Melbourne, and that in many ways, people showed more care and respect for the good of the whole community, rather than only caring about self-preservation and promotion.

My mother’s words concerned me, and made me wonder – has this sense of good for the whole been lost? I feel that maybe it has, that the good of the individual is now considered more important. However, often what is good for the whole, can also be good for the individual. Though an individual may decide to sneak across the NSW border, because in that moment it seems right for them, in the end this could cause another outbreak, which would in turn negatively impact that individual.

These days, many people seem to be rather disparaging of the phrase ‘the common good’. I have encountered those writing in newspapers and on social media, complaining of how the government is forcing people to be tested “for the common good” as if it is a bad thing! However, some do believe in the importance of ‘the greater good’, and I hope that with time and discussion, more of us will.

In On the Beach, the deadly radiation infecting Melbourne is invisible. An unseen enemy, just as COVID-19 is. Ultimately, though, you cannot hide from this silent killer. It is inevitable, it is going to kill you. The characters of On the Beach cannot self-isolate indoors to escape danger as we can, yet they deal with their situation graciously.

The film concludes with shots of a deserted Melbourne – not a soul on the streets. This is eery because there is no sign of destruction. The buildings are intact, with no markers that anything is wrong but the sheer emptiness of the city. These images are of striking similarity to our quiet Melbourne streets, alongside scenes of deserted precincts in other cities around the world  this year.

When On The Beach was released, the Philadelphia Inquirer stated: “There is not the slightest doubt that this is the most important motion picture ever produced… and the most moving!”. The film is considered important because of its strong anti-nuclear message, yet I now believe this is not the only reason for its importance. On The Beach can teach us plenty about the world today, and how we have changed. Beyond its thematic message, I also recommend the film for its fabulous cinematography, remarkable acting and haunting use of music (a kissing scene backed by the sound of drunken men singing Waltzing Matilda may sound unusual, but is especially poignant).

The media often focuses on the negative and selfish responses to the rules designed to help us. Yet a silent majority do remain, committed to altering their behaviour for the common good. This can be seen by the number of people who write into the ABC’s coronavirus live blog, for example, asking about the right thing to do. Like Dwight, these people personify social responsibility, which we should all aspire to.

If we all do the right thing, then eventually everything will be fine. So why not act with reason and benevolence?

Imogen is a first year student studying a Bachelor of Arts/Bachelor of Business double with majors in History and Marketing! In 2018 she won First Prize in the Senior Secondary School Short Story category of the My Brother Jack Awards with her piece Pensioner Purgatory, which was published online.