a new era of masculinity 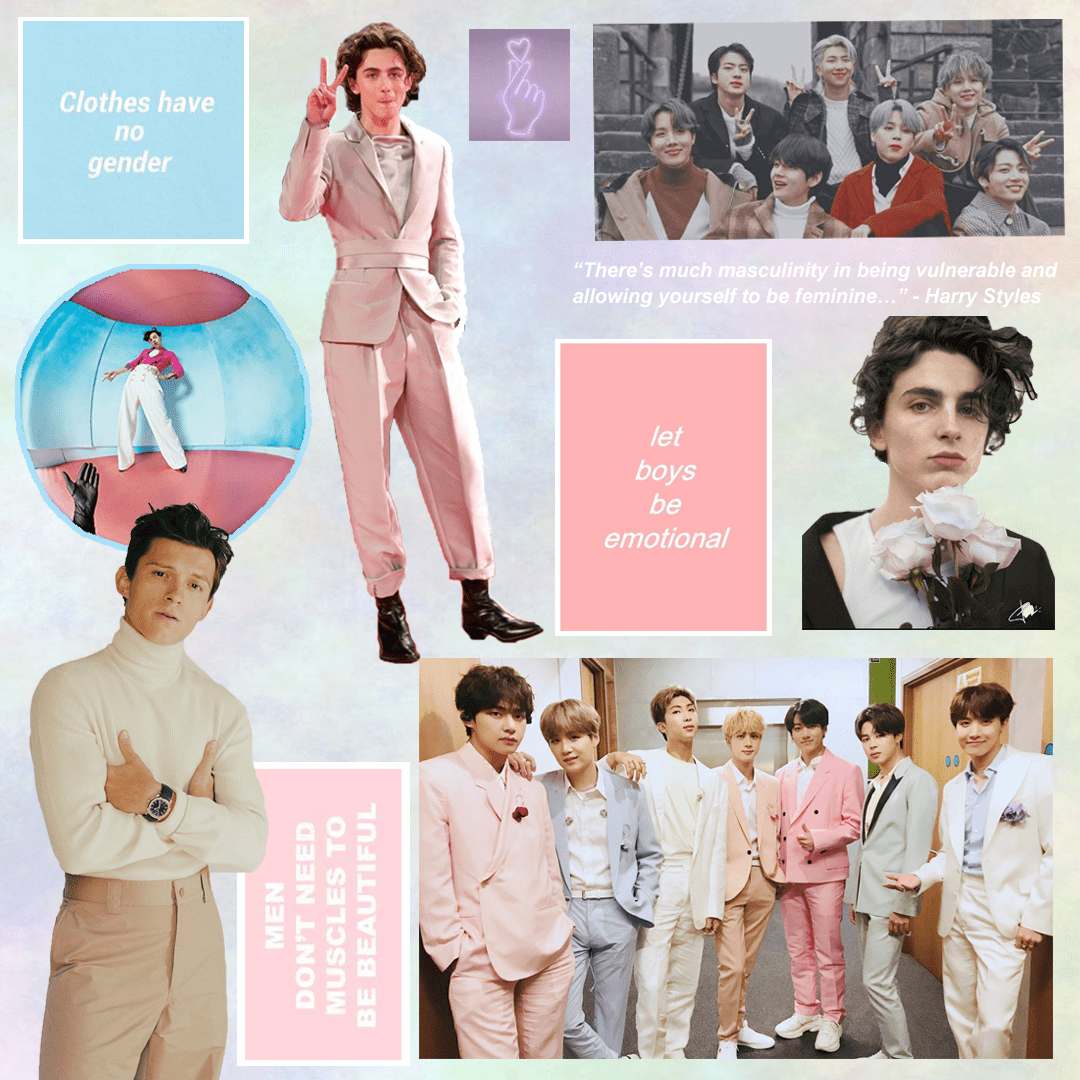 Artwork and writing by Belle M.

Stoic, strong, unemotional and dominant are words commonly associated with masculinity. Unsurprisingly, these male stereotypes are further fuelled by the mass media and entertainment industries. Over the last couple of years, however, these industries have experienced an incredible shake-up, with various talented young men ushering in a progressive and exciting new era for masculinity…

A famous, and much-loved example takes the form of Harry Styles, well known for infusing some much-needed colour and flair into the music industry. Styles confidently blurs the Fine Line between society’s black and white definitions of masculine and feminine and gay and straight. Alongside his beautifully progressive song lyrics, Styles further defies toxic masculinity traits through his androgynous clothing choices, colourful and embellished suits and jewellery choices.

Then there’s the promising young actor Timothée Chalamet, star of a plethora of groundbreaking projects including Call Me by Your Name and Beautiful Boy. In these films and many others, Chalamet clearly and effectively embodies complex characters exploring complex emotions.

His raw and impassioned performance as Laurie in Greta Gerwig’s film adaptation of Little Women is a testament to this. One could say that Chalamet is showing the world, one film at a time, that unbottling your emotions and expressing yourself doesn’t make you any “less” a man. Oh, and not to mention – Chalamet has quickly become a fashion icon for his show-stopping red-carpet ensembles, head of soft curls and genuine kindness towards his fans.

When Spider-Man: Homecoming was first released, numerous headlines proclaimed Spider-Man as “the most feminist superhero”. On the surface, this is a lighthearted and fun teen film, however British actor Tom Holland’s portrayal of Peter Parker is surprisingly nuanced. Spider-Man is openly emotional and awkward, doesn’t claim to “have all the answers”,  and makes a clear point of respecting women.

Tom has also been making waves outside of his role as an iconic Marvel superhero. In an interview with GQ magazine, Holland opened up about being bullied at school for practicing ballet in the gym instead of the traditional “boy’s sport” rugby. Tom proudly admitted that all those hours wearing tights and dancing by himself in the school gym has been incredibly valuable to his career on a number of levels, and is something he doesn’t feel like hiding.

Perhaps the most nuanced and diverse expression of masculinity is through K-pop. Fans enter a colourful universe when they watch these mesmirising music videos, with vibrant and ever-changing hair colours, elaborate outfits, dainty jewelry and glowing flawless skin. Whilst the authentic and progressive K-pop aesthetic is sadly known for making many Americans uncomfortable, this only emphasises how the Western psyche does not associate masculinity with softness or beauty, unlike some other cultures. However, K-pop music has still amassed an enormous passionate fan base – aptly named “army” in the case of boy band BTS. This speaks to the diverse nature of the genre, highlighting its enchanting and liberating appeal to men and women from varying nationalities.

Together, these multi-faceted and courageous men (alongside many others) are dismantling the long-established boundaries of gender stereotypes, emphasising that men can do things typically seen as more “feminine” without threatening their own masculinity.

In the words of Harry Styles, there’s so much “masculinity in being vulnerable and allowing yourself to be feminine… and becoming comfortable with who you are.”