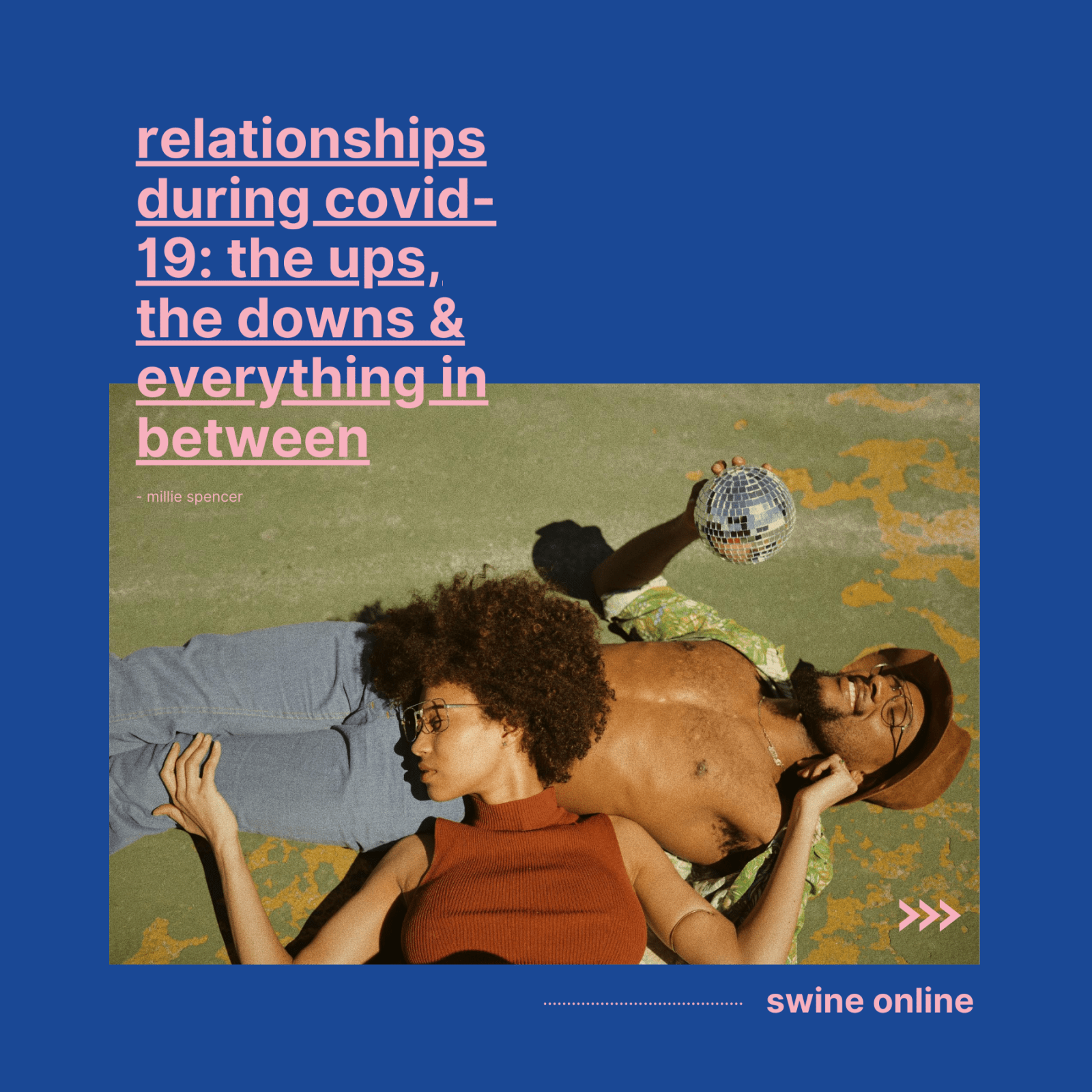 In the first week of semester 1, my Global Media Industries lecturer began his lecture by telling us that 70% of people meet their life partner at university…so if we didn’t want to die alone, we should turn up to class. Looking around the room of first years, I could see from their wide eyes and open mouths that they were experiencing an epiphany: ‘I’m actually going to bother turning up to uni!’ But then we were hit with COVID-19, forcing us to stay home, interact with people via a screen and most likely ruin our chances of ever meeting a life partner.

Victoria’s forced lockdown has evidently destabilised traditional expectations of dating life. How has this societal shift, combined with the general instability of life as a university student during a global pandemic, impacted on the lives and mental health of students?

Jazzy Swedosh, a second year Bachelor of Health Science student, suffers from   depression. She told me that COVID-19 exacerbated her tendencies to overthink, resulting in her becoming introspective to the point where she almost lost grip on reality. Her partner who had never experienced depression before also began to suffer, as a result of social isolation and not being able to attend university on campus.

“He needed me to emotionally support him just as he’d done so often to me, but my struggles with mental illness prevented that,” Swedosh explained. “I’d try to help him, but my lack of self-worth believed that I was the reason he was depressed, and that my selfishness about making it all about me only made him feel worse.”

Swedosh and her partner have been together for over a year and generally see each other daily. “[Pre COVID] My boyfriend and I went from having sex every day to about once a week, I was expecting the opposite and I even invested in some sex toys for us to use together.”

Although Swedosh and her partner continued to see each other, they felt their “connection begin to dwindle. “We both lost our sex drive and began to feel not 100% comfortable around each other. We communicated all of this and talked regularly about how this feeling of emotional distance was affecting us, but it’s still just so hard.”

They are currently still seeing each other, but less frequently, Swedosh told me – in the hope that it will give them some more clarity about how to handle this situation. “We are so in love with each other and this is our first real rough patch, and it’s been so hard realizing that we are not immune to struggling with our relationship (as I know no one else is).” She is holding out hope things will go back to normal and their relationship will be stronger than ever. “I am 100% certain that the amount of love we have for each other will prevail and we will be stronger after getting through it together .”

Like Swedosh and her boyfriend, COVID-19 has affected the mental health of many young people in Australia. A recent ANU study indicated that 10.8 per cent of Australians reported a serious mental illness compared to 8.7 per cent in 2017. With young people aged between 18-34 years being largely responsible for this increase, the impact of the pandemic on our dating lives becomes clearer.

However, the global pandemic didn’t quite spell doom for P’s love life. P, a Swinburne student and academic staff member who wishes to remain anonymous, took to online dating for the first time during the pandemic. It had been a while since she last had a relationship, so she took the opportunity to delve into the world of dating by downloading Bumble.

She swiped right and quickly initiated a connection with someone who worked near her. “We recognised each other from work, so it was already a bit promising,” P told me. They managed to catch up for two dates before Victoria was in a complete lockdown and decided to continue dating by moving their relationship online, where they tried to be inventive with their virtual dates. Because her date worked in the hospitality sector, they organised to cook food for each other and drop it off to their respective houses “without actually interacting”. Video calls asking deep questions, virtual cards against humanity and Netflix watch parties were also common for the pair.

P said they had “great conversations” and got to know each other quickly, which was a welcome contrast to her previous dating experiences, where the physical tends to happen early on. “In this case it was very much like getting to know the person for who they are, which was really lovely.”

However, P said the online dating experience was full of ups and downs. Sometimes she would feel amazing after their dates, while at other times, they would message each other and express how flat they felt because they couldn’t see each other in person. “I think those ups and downs sometimes can impact you a lot harder, especially in isolation. You don’t really have your friends that you can see in person to vent to, or chat about the date with, you can talk to them with video call, but it’s different to when you can just hug a friend.”

With her main focus during the pandemic being to keep her family safe, keep herself safe “and not spread anything”, P set clear boundaries with her date, including “not catching up in person until the health authorities/Government said it was finally safe to do so.”

While they were aware of the fact that partners were allowed to see each other during lockdown, P says they we were not quite at “that stage”, which left the pair in a “weird grey area.” These boundaries proved to reveal their compatibility. “I eventually found out he was not really honouring the lockdown restrictions, whereas I was being a bit more strict with them.”

As restrictions started to ease, P arranged an in-person date. But the week before the date was due to happen, her date became very “flaky and distant.” Eventually, he called P and told her “considering you’re so worried about the health side of things, you know, I’m still going to be going out, catching up with friends. I’m still going to be doing all this stuff and I’m not sure how comfortable you’re going to feel around me. So maybe it’s best we wrap this up.”

“It threw me off quite a bit, because his personality on the phone was completely different to how he had been this entire time,” P said.

P said this experience was a “massive learning curve”, with her date’s refusal to adhere to lockdown restrictions “being an indicator of [us] not being on the same page in general”. “If someone can’t take the situation seriously and do the right thing, it makes you question how seriously they’ll take any situation.”

She advised that for anyone struggling with dating or relationships, setting boundaries that allow you to uphold your personal values is vital ,“especially during something like a pandemic when you have kind of no choice but to uphold those values, you can really kind of filter out the ones who are really not meant for you.”

Essentially, this experience has allowed P to learn more about herself and unpack what she wants in a relationship. Though online dating can be flaky and end quickly as a result, “either way [it’s an] insane learning experience and, definitely something that you reflect on when you’re like 80 years old and you’d be like, yeah, during the COVID-19 pandemic I dated someone.”

“I think it’s given me a really good insight into dating, for when it becomes a bit more normal again. Honing more into that beginning phase of really getting to know the person and testing those boundaries and seeing where you both lie,” she said.

P is now more open and confident about the idea of online dating. Mid-pandemic or otherwise, explaining that she “definitely wouldn’t deny the experience in the future.” With that said, online dating can foster a “keyboard warrior mentality” that may leave couples less connected to each other. “Sometimes I think you make promises and, you know, you kind of create all these ideas because you feel less, I guess, attached to the situation because it is more virtual.”

In order to succeed, P believes that online dating requires a mutual agreement between both people from the beginning, to ensure that clear boundaries are set and open communication is established.

“I think it takes a cliché; it takes two to tango.”

She added that both people should disclose what they are willing to do or not do, understand each other’s preferences and engage in consistent, open communication.

“And you know, the minute you feel like you can’t do it anymore, just say it because the worst thing is not getting messages back for a week.”

Though COVID-19 has simultaneously impacted the relationships and mental health of students, it has allowed some young couples to forge stronger bonds. Pippa Criss-Chisholm, a fourth-year part time student studying Games and Interactivity, has been living with her partner Austin throughout the pandemic. Criss-Chisholm has had to take on the “home maker role rather than working partner role” after losing her job.

“I somehow feel as if I have let down my feminist predecessors by losing my job,” she said.

Criss-Chisholm explains that her mental health has suffered as a result, presenting a challenge for the couple.

“[Austin] is endlessly supportive but when I’m spending 9 hours of my day by myself, a lot of those hours after dark, there is only so much he can help.”

Despite these difficulties, Austin has been a great source of support for Criss-Chisholm. “He held me through my tears of anger and grief, my panic and not being able to get what we needed from the shops,” she said.

“He has been my rock. He even nursed me when I became sick and had to isolate after testing and made sure I was warm and cared for.”

Criss-Chisholm has noticed a change in her relationship dynamic due to the stress of losing her job and being isolated from family and friends. Being alone for most of the days, Criss-Chisholm now treasures the evenings and weekends when Austin is home from work.

Evidently, dating during COVID -19 is complex and multifaceted in nature – and doesn’t come without its low-points. Many of us have had to adapt by moving beyond conventional ways of initiating and maintaining relationships.

2020 has been life-changing for many of us, but the stories of Jazzy, Pippa and P have shown that when we think creatively, support our partners and set clear boundaries, our relationships can serve as a great source of comfort when the world feels like it has been flipped on its head.

Millie is a first year Media and Communications student majoring in Journalism and Media Industries. She has written for the Swine, The Standard and is the editor of Boroondara Youth’s online publication SPACE Reviews. Millie has a background in Arts and Events and one day hopes to work as a Producer or Media Advisor for a media outlet or arts organisation. In her spare time Millie enjoys walking, baking sourdough, playing with her puppy Bonnie and shopping for earrings made by local designers, adding to her growing collection!